Getting Ready for Fall

We have one last heat wave that is hitting now and then we should be in the clear for cooler weather-finally!

Last year, with how we ended up celebrating the holidays with family, I ended up decorating way early, both for fall and Christmas. This year, I'm doing my best to hold off, but with all the fun crafting projects on the horizon, I'm getting a little anxious. Maybe sharing what I'm working on here will help satisfy my anxiousness and excitement. 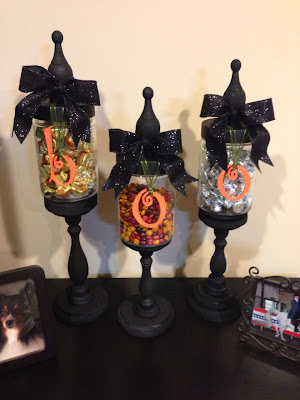 Had to go between Hobby Lobby and Micheal's to get all the pieces I needed, but it worked out. I bought some other letters (J-O-Y) and ribbon to change out for Christmas and plan on getting some additional ribbon in our house colors to use year-round. Overall, the project took about 2.5 hours between dry time with the glue and paint.

Yes, I know it's not even fall yet, but I already know between my work schedule and weekend plans that this is going to take a lot of time to do right. This is a total of 18ft, plus there is another 5-6 ft of garland that I have yet to "fit" to my smaller banister. However, I'm confident that when I'm done, not only will it look stunning, but I'll have a custom piece that blends my house colors and typical Christmas decor (unlike the one I used last year).

Richard and our friend Ron where inspired by my father over the 4th to start exploring the hobby of home-brewing. I'm loving the fact that Richard has a hobby now and gets to have regular "man time". Since the middle of July, the two have brewed up an Oktoberfest lager, Patriot ale, Imperial Nut Brown ale, will start a American Golden ale this weekend or next. Nothing has been ready to taste-test (the INB ale was just bottled last weekend and needs another week to carbonate) :(
Posted by The Carter Family at 6:19 PM No comments:

I can't believe that in 2 short days we'll have officially owned our house for a year. It seems like yesterday that we were moving in.

So in honor of our anniversary, and to share what's been happening since the last time I blogged, here are a few updates:

1. We upgraded our hinges in the kitchen to soft close-they're awesome and an was an easy DIY install. However, in order to do the same to the drawers, we're going to have to contact Timberlake and order all new hardware because of the material the cabinets are made from.

2. We've repainted the higher traffic areas in Sherwin Williams best paint. If you're considering the paint package, look at your other options first, as the paint Ryan uses is thin and flat-easily shows dirt, scratches and takes the paint off when you clean it.

3. Richard's office is now complete and an in your face tribute to his home team the Buffalo Bills.

4. Finally, I broke down and did the landscaping edging I've wanted since last year plus adding a touch of color for the season.

Overall, the house looks completely different. Its crazy how much things have changed/evolved in the past year. 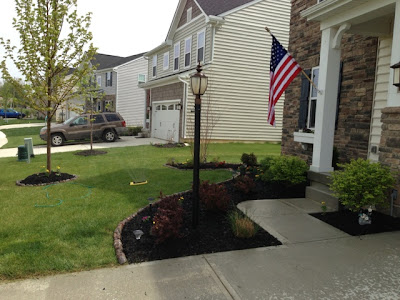 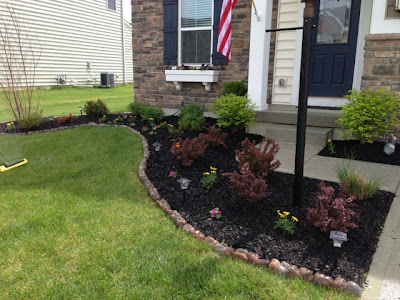 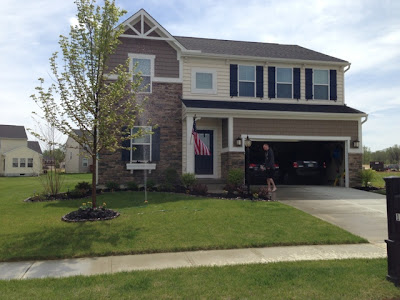 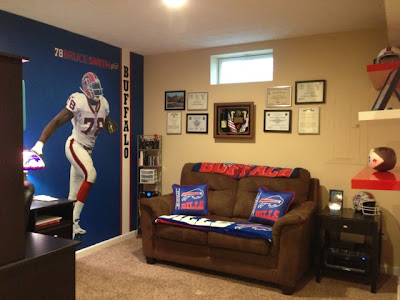 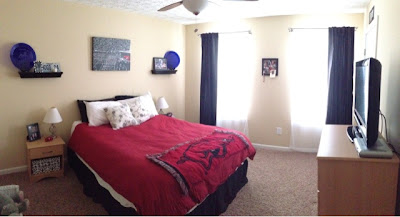 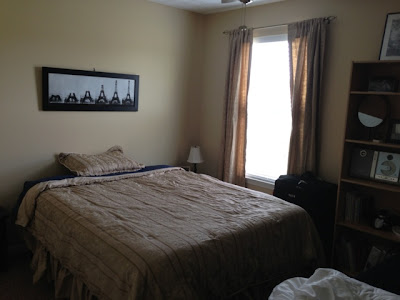 The fourth bedroom officially has a bed but still bears the burden as being a catchall. 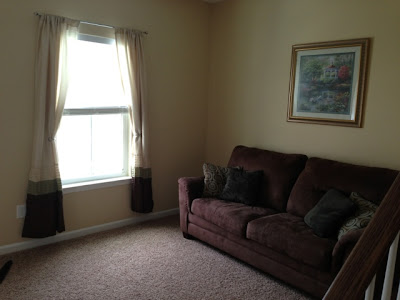 Front room is still under construction, but at least looks like some thought was put towards it instead of having nothing in it. Its not visible in the picture, but we even a light fixture to replace just the bulb. 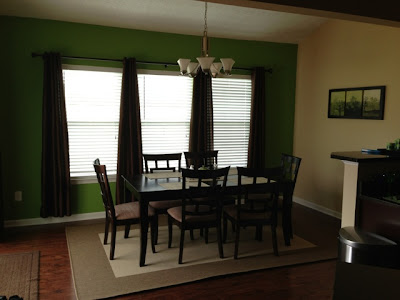 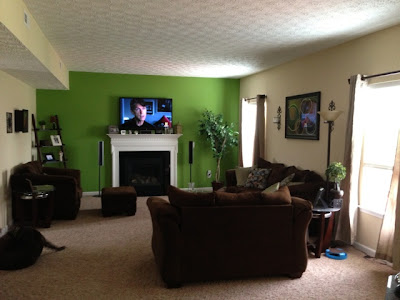 Posted by The Carter Family at 4:16 PM 3 comments:

Now that we're settled in the house, I've been trying my hand at some crafts. I've always enjoyed finding and trying out new things, but since I've been furloughed, I've finally had the time to accomplish it!

Here are a couple of the projects as of recently:

Photo Wreath
We always end up with cards laying around the kitchen. I wanted a way to keep the cards as a reminder of the kind words people send, so after searching for ideas via Pinterest, I came up with this.
I started by spray painting the clothespins and wreath ring colors that would match my kitchen. After everything dried, I spaced the clothespins to cover the holes that were on the wreath and fill the spaces in between. The ribbon was leftover from Christmas. Hung from a  3M command hook on my pantry door and it fits just perfectly! 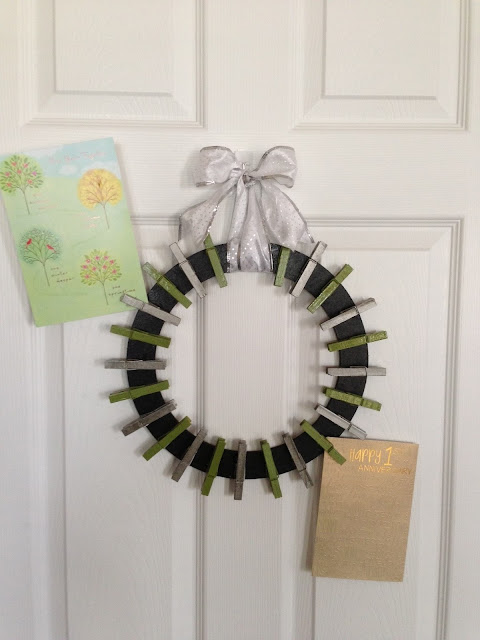 If I make more as gifts, this is going to be a trial and error process...but here's how the first turned out.

I started with the cheap, plastic pony beads (about 2500 of them). Later, I used an upside down candlestick holder with E6000 adhesive. 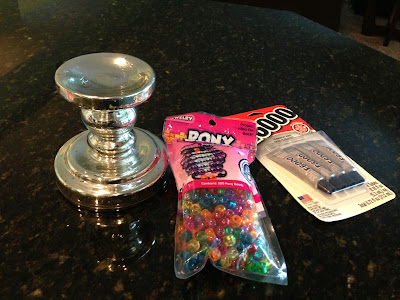 I melted the beads in a 12" omelet skillet for about 25 minutes at 400. Next time, I'll try a little longer to see if it will come out a little less bumpy on top. I've read that you can also use a pizza pan, but this is what I had on hand (since my pizza pans have the air circulating holes).

However, I'm not sure if because my pan is andonized that I really should have used it. On the bottom side, it was nice and smooth, but took on the slight texture of the pan, making it more cloudy looking and less translucent like it does on top. I'll probably pick up a cheap 12" cake or pizza pan next time. 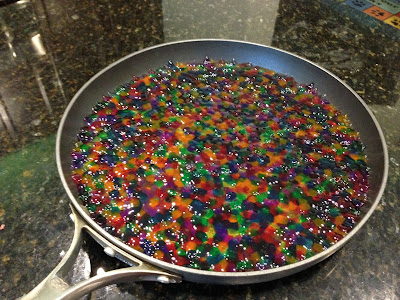 After removing from the heat, I let it cool for about 20 minutes. When the plastic settled and re-hardened, the edges were slightly raised and had pointy edges. I just took a sanding block and rounded them off. I kind of like the little edge it created to give the platter a little definition.

This is the final product. I should mention that it does smell when "cooking". I didn't notice it until I opened the oven door to check on it about half-way through. The smell went away as soon as I removed it from the oven. 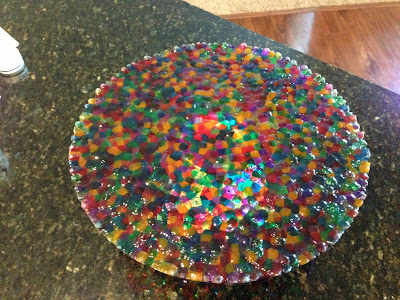 The bottom turned out nice and flat, but there were small spots where the plastic didn't completely melt. 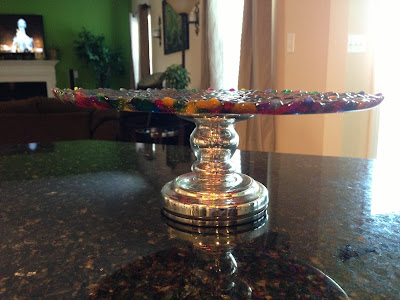 Looking forward to use this next time I bake a cake or make some goodies that deserve a nice presentation! For now, it's housing my candles :) 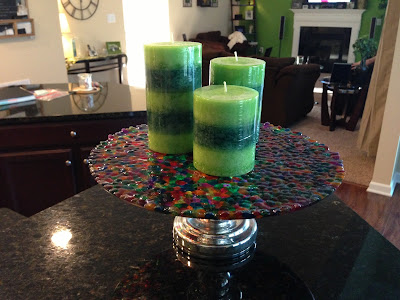 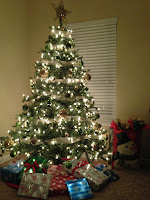 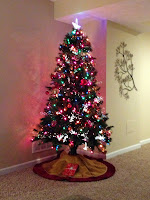 Our Christmas trees in the living room and basement. 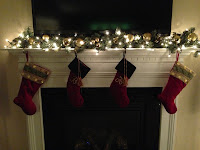 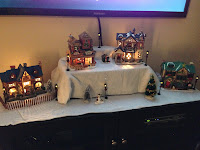 Our Christmas village...through we've added to it since this photo was taken, our stockings over the fire place in the living room, and some of the exterior lights we hung. Next year I'll focus more on the outside. This year was more finishing touches around the house. 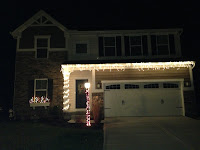 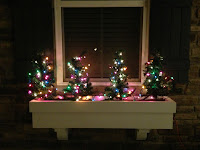 It's been a hectic two weeks preparing for Richard's family to visit for Thanksgiving-gathering recipes, shopping for all the groceries and having the house look somewhat holiday-esque for Christmas too.

Overall, I'm sad it's over and that work is looming in about 36 hours, but I'm looking forward to our trip to my parents for Christmas next month. The good news is, I've got all my shopping and wrapping almost done!
Posted by The Carter Family at 7:56 PM 3 comments:

A few wedding photos too... 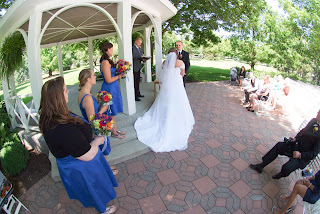 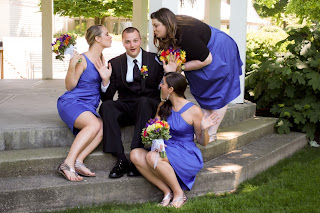 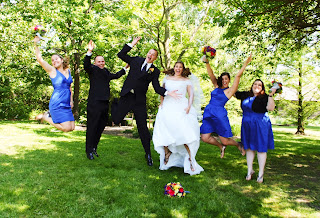 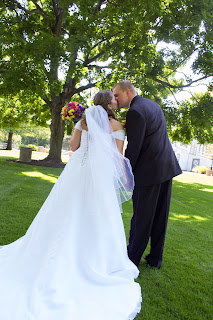 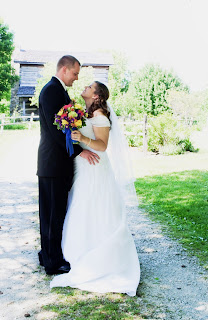 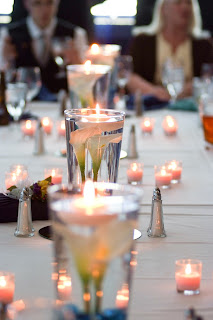 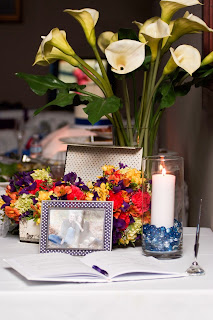 Posted by The Carter Family at 6:02 PM 4 comments:

Hope everyone has been well and had a smooth transition moving in to their new homes! We've been in our house for almost 6 months now, and it's been fabulous! We spent the summer organizing and prioritizing purchases to finish rooms. We still have a lot of progress to go, but I'm very happy with where we're at...not to mention stoked for the upcoming holidays and all the decorating we get to do :)

Other than that, we've stayed fairly busy-finally took our honeymoon to Gatlinburg (absolutely gorgeous), visited and hosted family and friends, and just enjoying life!


One thing I don't have a picture of is the amazing storage/organization system we hung in the garage. I love that we can pull both cars (his a luxury size sedan and mine an SUV) in to the garage with space to walk around. Everything is up off the floor and easily accessible.

Anyways, hope you enjoy the update, and have a great HALLOWEEN!
Posted by The Carter Family at 5:02 PM 2 comments:

The Carter Family
My name is Heather and my husband and I built a Venice in May 2012. We love our home and look forward to creating many memories within it!